A short video presentation. Please scroll down for another one.

This is a short presentation:

The flag of England is derived from Saint George’s Cross (heraldic blazon: Argent, a cross gules). The association of the red cross as an emblem of England can be traced back to the Late Middle Ages, and it was increasingly used alongside the Royal Banner in the wake of the English Reformation, especially as a maritime flag referred to as a white ensign. It was used as a component in the design of the Union Jack in 1606.

It has been widely used since the 1990s, specifically at national sporting events, especially during England’s national football team’s season.

Our English flag is made from carefully selected and upscaled wood and has an interesting 3D look that makes it stand out.
The best part is, it has a sound sensor that goes close to a sound source or just captures the ambience sounds and it flashes the LED lights positioned nicely under the coloured parts of the flag. The effect is really stunning, especially when the surrounding light is dimmed.
What’s also nice is that the variety is never-ending, as you can use it for all kinds of music genres, play among friends and family with your own voices that synchronize with the light and up to even more fun with the flag flashing in the rhythm of a sports match commentary that will bring all the watchers from a pub into the edge of joy while they are cheering for a goal.

It is a great decoration for your home or office and an amazing present idea for any occasion.

It is made with love in the United Kingdom and it’s a great decoration for any Englishman.

There are no reviews yet.

There are no enquiries yet. 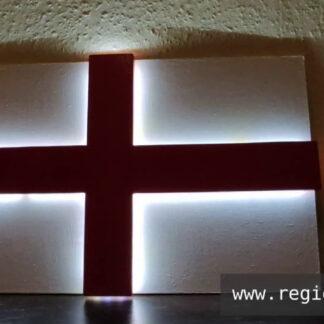